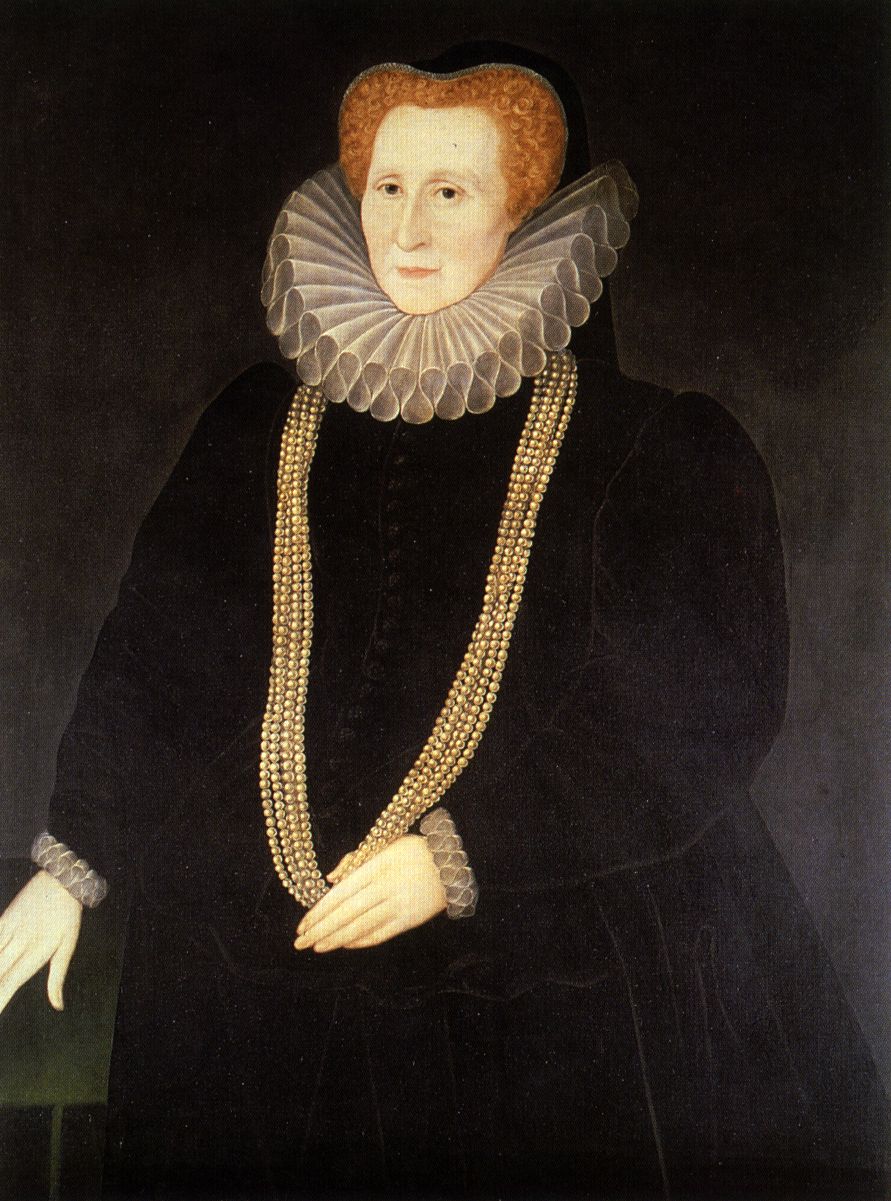 I assure You, there is No Lady in this Land that I better Love and Like.
said Queen Elizabeth I about Bess of  Hardwick. The formidable and fashionable Elizabeth Countess of Shrewsbury. Bess of Hardwick, as she is known, was one of the best-connected — and richest woman — in Britain after the queen.
Married four times, she survived all her husbands and then returned to her family estate where she built two large houses… one for herself and a second for servants and visiting guests.

On October 4, 1597, Elizabeth Countess of Shrewsbury moved into her new house at Hardwick in Derbyshire.  Construction began in 1590.  It was the grand product of her collaboration with the famed Elizabethan architect Robert Smythson. This day is thought to have been Bess’s 70th birthday*, also the day she chose to move into the unfinished grand house.
The house placed at the top of a steep hill with its tall window-filled towers revealed views for many miles of the surrounding countryside.
Hardwick reveals Bess’s desire for personal expression — Elizabethan courtly ritual and domestic custom are married with Smythson’s architectural formalism and design. 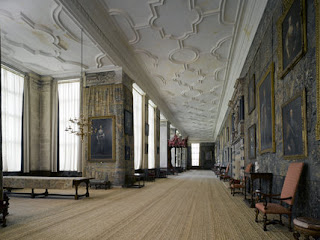 Smythson and Bess thought about each season of the year from the lengthy warm days of summer to the dark and cold depths of winter. Smythson brilliantly managed how daylight would filter into Bess’s environment. Alternating warm sunshine through the windows and the structurally sound piers.

The earliest galleries were designed to be protected corridors leading from one great room to another. But during the Elizabethan time they acquired another important function as a place for indoor exercise. Sixteenth-century doctors stressed the importance of daily walks and long galleries allowed for this when weather outside was frightening.
During the bitterly cold winters of this unusual Little Ice Age, there were fixed lights on the walls and large copper candlesticks as well as other candlesticks of various materials and sizes giving night time illumination to the magnificent house. 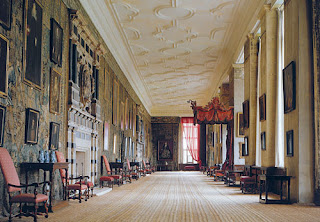 Bess also owned coal mines. Almost every room has a fireplace. 28 of them. 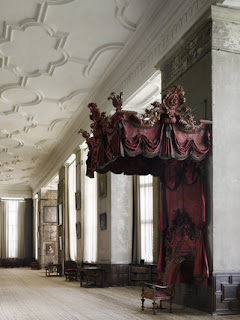 Bess wanted in her floor plan a grand processional route through the hall, up a dramatic and romantic stone staircase and into the High Great Chamber, the ceremonial center of her house. 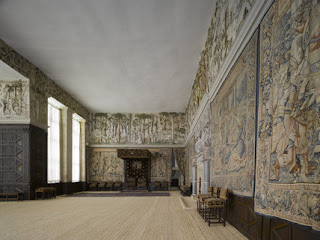 The great chamber is Flooded light illuminates the rich decoration of tapestry covered walls and plaster relief friezes. Here the story of Diana depicted in relief running around the room symbolized Bess loyalty waiting for that royal visit from the queen, her friend. 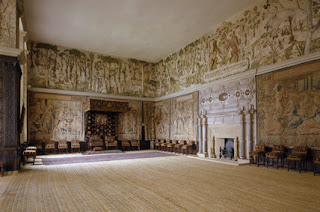 As she waited, perhaps, she gazed upon the portraits of her former husbands and wondered without their powerful connections and immense wealth she could have never risen from an obscure daughter of an indigent squire to a grand countess and lady-in-waiting to the queen.
Though the queen never came, Hardwick Hall was the zenith of Bess’s vision. A lasting triumph to us today.
* See Mary Lovell’s Bess of Hardwick: Empire Builder.
The Long Gallery at Hardwick Hall, Derbyshire, with the canopy supplied by Francis Lapierre.
All images from Country Life.
Bess of Hardwick