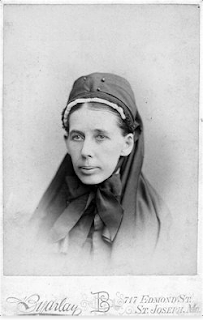 Constance Fauntleroy was born on January 15 to a leading family in New Harmony Indiana. She was the granddaughter of British Utopian socialist, philanthropist and textile industrialist, Robert Owen.

In 1859, Constance Fauntleroy Runcie (1836-1911) founded the first women’s social club east of the Mississippi in New Harmony, Indiana. She called it The Minerva Society.

She moved to the city of St. Joseph, Missouri in 1871 with her Episcopal minister husband James Runcie. A lot of things were happening around this time in St. Joe. The railroad reached the town in 1859 where it served as a supplier and distribution point to the entire western half of the country. St. Joe is known for a lot of things — John Patee opened his luxurious four-story brick hotel just a year earlier where Oscar Wilde later stayed, the Pony Express in 1860 and 61, Sanborn Fire Insurance Map Company established in 1867, and the death of Jesse James in 1882.

In 1894, Mrs. Runcie founded the Runcie club — the oldest existing women’s club today. She wanted to further cultural development and provide an intellectual outlet for the good women of St. Joseph. The club is still very much active today. In 1995, I curated an exhibition of the art purchased, compiled and carefully collected by members of the club over the years. Seventeen years later (boy, that hurts) I was given the opportunity to deliver a lecture to the members of the club where I asked:

Can the decrease of interest and value of domestic objects
be linked to a deeper and more profound change
in how we regard the role of the housewife today?

There are still a number of far-sighted women who over a century later realize that education and civic involvement are essential elements in building a stable community. Although women have made great advancements in the professional world since that time, we still can learn a thing or two from Women’s Clubs of the nineteenth century: we still need to open opportunities for women and develop support systems for each other.