Mary Rockwell Hook once described a troubling time in her early years when she was studying at the École des Beaux-Arts. After class, she had to run as fast as she could to a taxi as she dodged buckets of water being thrown at her by disgruntled male students. She was the only girl in her class, and the second American female to attend after Julia Morgan. The year was 1906.

This hostile gender bias wasn’t anything new. Previously, she studied at the Art Institute of Chicago, the only female in her class she experienced similar behavior. Some parents thought that young men could not learn to their full potential with a young woman present. Many parents wanted their money spent on a solid education for their sons. The fairer sex was much too distracting, it was thought. This theory still holds true today by some parents. But a more prevalent theory was that architecture was a male domain and considered no place for a lady. 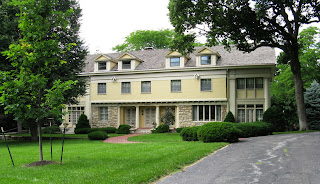 The house she designed for her parents. 1908. It was the first home in the area to have a built-in garage. The city didn’t know what to do with this. It conflicted with regulations, so she had to put in a fire-proof steel garage door which still exists today. The house originally had outdoor porches which have since been enclosed.

Upon Mary Rockwell Hook’s return back to the United States, she applied for a job with an architecture firm. They turned her down because of the simple fact that she was a female, and they didn’t want to watch her climb all over life-sized models. But MRH was not intimidated. She was driven and had the support of her family behind her. Another architecture firm did accept her, but her father did not like the idea of Mary working for a salary. Aware of her well-trained solid skills, he commissioned her to design their family home in Kansas City. It was here where she launched a prolific career as one of Kansas City’s most innovative architects and became a pioneer among professional women. 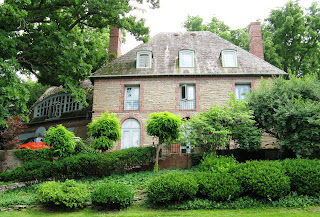 She did have a number of things in her favor. Born on September 8, 1877 in Junction City, Kansas, she was the third of five daughters, (sandwiched between Florence, Bertha, then Catherine and Emily). Her parents insisted on the highest standards of education. She graduated from Wellesley in 1900 and her father’s successful business in banking and grain elevator business allowed for Mary to travel widely. 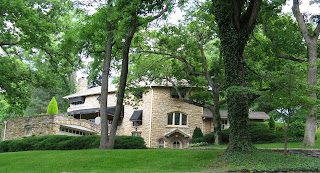 Hook designed open floor plans mixed with a little bit of the unpredictable. Although her designs are asymmetrical, there is something incredibly harmonious and balanced about them. Older houses in Missouri have always possessed a quirky twist. Mid-western architects provided their own interpretations on East coast designs with a dash of European idiosyncrasy. Hook did just that. But each one of her homes has a well thought-out spatial plan with interesting, unique appointments. 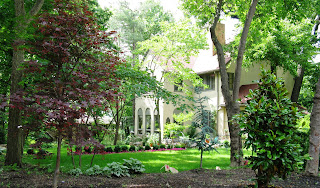 I am of the belief that a woman is — if living with the opposite gender — truly the head honcho of the home. She is the one, no matter how progressive the relationship is, who is ultimately responsible for a well-ordered home. Therefore, it makes sense to me that she would have invaluable insight of the structure, the circulation patterns, storage space and light. No one knows the flow of the house better than the one who is responsible for maintaining it. 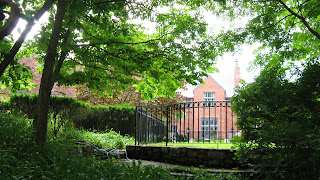 The house she designed for herself where she lived with her husband who she wed at 44.

Many types of female birds are in charge of the construction of the nest. She is the one who decides the location. She has her chicks to think about. She knows that she needs to build her nest on a sturdy branch. She knows she needs protection from the weather and from predators. She delegates to the male about gathering twine and twig of all sizes. It is the mother bird who stays behind to manage construction and place every piece with astounding accuracy. 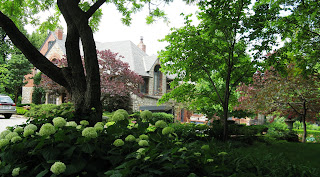 Mary Rockwell Hook is one of Kansas City’s pioneers. She was one of the country’s first architects, and formed an architectural partnership with Eric Douglas Macwilliam Remington. She worked throughout the United States – from Colorado to a sandy key off the coast of Florida. She was the first to use cast-in-place concrete walls. Many of her aeries can be seen in the Sunset Hills around Loose Park. Hook used recycled materials such as a slate roof from an old church, and thick beams from abandoned railroad bridges. She liked to juxtapose the rough with the elegant. She combined stone and brick with tall broad windows conscious of bringing the outdoors inside. She was not afraid of much and took risks. She even was known to construct small platforms or stages in various rooms throughout houses for an occasional and impromptu piece of theatre. I think in her own words Mary Rockwell Hook describes her work best, “Houses should be fun”.

Mary died on her birthday 101 years after her birth.

(top image from Wikipedia; remaining images from my camera)