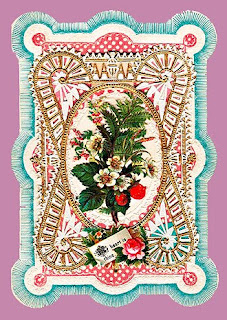 As time passed on, the meaning of the holiday changed. The target of affections went from friends and family to one of a romantic nature.

In 1847 a teenager named Esther Howland (1828-1904) became memorized when she received her first Valentines day card from England. It had an elaborate border of lace and decorated with ornate flowers that had been cut-out of paper, colored and pasted on. In the center was a small, pale green envelope containing Valentine’s Day sentiments. She showed it to all of her friends and asked her father who owned a book and stationary store in Worcester, Massachusetts to import and sell ones like it in his store.

Then Esther tried making one. She liked it and made more creating nearly a dozen different designs. She sent these prototypes with her brother who was a salesman for their father’s company. He made his rounds and returned with over $5000 in orders.

From England and New York she ordered colored pictures, lace, silk, satin and ribbon and in 1849 set up her business in her parents’ home hiring an all-female staff to trim lace, glue metallic glazed wafers of paper and stencil designs. Esther Howland was firmly launched in the valentine business. By 1879, The New England Valentine Company was incorporated and eventually grossed $100,000 annually.

Esther never married. Joan P. Kerr wrote in her book The Amorous Art of Esther Howland, that she was remembered as a “woman with high color and glossy chestnut hair.”  She rode a “high-stepping horses and looked like an aristocrat.” She was good looking and “dressed in fashion and had facials.” Howland understood the importance of sending a Valentine’s Day card to friends so she published a book of verse for her customers who could select one and include it in their card. One example: “May friendship’s constant kiss be thine/From this sweet day of valentine.”

Howland retired in 1881 to take care off her father and sold the business to George C. Whitney Company who turned the designs out by machines.  With the machine age came a decline of quality. By the early 20th century, most valentines were just a folded sheet. And with that, the intricate handmade designs of Esther Howland became a thing of the past.